RELEASE DAY BLITZ! WITHIN MY GRASP by JOCELYN STOVER 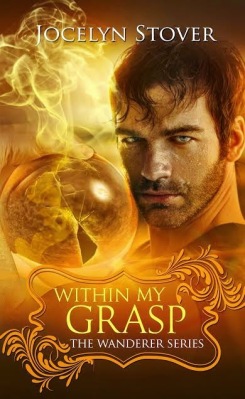 Zafir doesn’t believe the higher powers that exist give a damn about any of us, and he sure as hell doesn’t pray. The forgiveness he’s found for the sins in his past haven’t come from above but from the fatherless child he rescued. On a mission to destroy the remaining Sylph that had a hand in the death of David’s mother, Z and the Wanderers stumble upon a nasty plot over a generation in the making. As the enemy brings the battle to them David develops a potent new ability that threatens his very sanity. Fighting a war with his hands tied, Z is forced to turn to the one place he never imagined to help the boy he once saved: his knees. He seeks nothing more than the strength to finish the mission he started when he brought his son home. And God help anyone who tries to stand in his way…

Prologue
I laugh as the late night host
takes a jab at the guest on his show and I settle back on
the sofa. Using the thick ring
I wear I pop the top off the cold beer I’ve just retrieved from the fridge
and take a long swig. I’m not really one for jewelry but over time I’ve
grown accustomed to the heavy band and some of its finer functions, like
how it doubles as a bottle opener quite nicely. With a flick of my wrist I
toss the cap on the coffee table and try to focus on the television, but I
struggle. I’m tired. It’s nothing new; I can’t remember the last time I
wasn’t exhausted. Had to be before David, I surmise. Surely I’d slept better
before the little monster latched onto me?
As my thoughts shift toward the
child I mute the television and turn toward the closed
door across the apartment,
behind which he lies sleeping. My keen Wanderer hearing
doesn’t detect anything amiss,
in fact it doesn’t detect anything at all, causing the hairs on the back
of my neck to stand on end. A paralyzing fear snakes its way through my
stomach and before I can think twice I’m off the sofa. Mother’s
instinct…that’s how one of the women at the M.O.P.S. (Mothers of
Preschoolers) group I’d been going to had described it. At the time I’d
thought she was nuts and had almost let her know, using very specific terminology
that there was no fucking way I was plagued by some feminine sixth sense. Then
I remembered that they all thought I was a woman, thanks to a little mental
tampering on my part so I could fit in. Looking at it in that context her
assessment wasn’t so offensive, I decided. Still I’d Googled that shit
when I got home only to discover she’d been spot on. The unexplainable
feelings of dread that I sometimes get are apparently frequent in mothers
In a flash I’m barreling
through David’s door with no consideration for the sleeping
occupant. I can feel a light
breeze from the window that I don’t remember leaving open and panicking I
flip on a light. I run to the bed and yank back the covers that I find nothing
out of the ordinary despite already knowing something is very, very wrong.
“David?” I yell. Sweat beads on
my forehead as my eyes dart from the empty bed to the
fluttering curtains and lock on
to the malevolent grin and dark luminescent eyes floating in the shadows.
I lunge for the Sylph calmly hovering mere inches beyond the window sill.
“David,” he says, mimicking my
cry with mocking humor. Before I can get my hands
on him he dissipates, leaving
tufts of bright smoke that swiftly extinguish before my eyes.
“David!” I bellow again,
fingers dug so tightly into the window frame that it cracks. I
clutch at my chest and spin
about disoriented; it’s difficult to think. I have to move, I   have to find
him. My battle-ready body responds to the simple command and all higher
reasoning checks out. I leap through the window into the night; it’s time
to hunt.

Jocelyn resides in sunny California with her husband, who keeps her sane, and her four beautiful children. When not writing she’s either running to decompress or outside soaking up the sunshine.

This entry was posted on February 8, 2015, 12:40 am and is filed under Book News. You can follow any responses to this entry through RSS 2.0. You can leave a response, or trackback from your own site.