NEW RELEASE! Beneath the Splendor by Jami Taylor

A gripping tale of love, murder, and betrayal in antebellum North Carolina. Based on a true crime.
In 1853, Reverend George Carawan was arrested for murdering the timid schoolteacher Clarence Lassiter in the small town of Rose Bay, North Carolina, for supposedly seducing his wife. The subsequent trial was a media sensation at the time, with the story being reported in newspapers as far as London, England. The idea of a well-respected preacher shooting an unarmed schoolteacher would have been enough to gain an audience’s attention, but Reverend Carawan was thought to have done many more sinister things in his lifetime, all of which he found necessary in order to maintain his position of power and wealth in the community where he had made a name for himself.
Beneath the Splendor tells the story of what might have happened to propel these tragic events just as the corroded foundation of the South began to crack in the years before the Civil War.

A frightening and well-written story!

When I read the synopsis, I became an instant fan! I have heard a version of this story, as I am a southerner, and I was excited to receive this book.

Taylor has brought an old tale to life with a few twists, a wonderful cast of characters, and a writing style that captured every ounce of my attention.  This haunting tale invoked my deepest emotions and I felt a connection with the heroine, though it took a while-she earned my love slowly due to her naivete. Written by a true Carolinian, there were several aspects of life that were relatable, and the setting was almost like a memory. This is something I take to heart, as each southern state has its own idiosyncrasies and not all natives can depict them so eloquently.

The paranormal was flawlessly introduced and continued to remain a pivotal part of the story. There are a few points of view, which enhance the story, instead of hindering the flow, and the ending wraps up very nicely.

I must add that the Reverend was a great character, and as a horror fan, I feel he belongs on screen.

All around, it was brilliant! I will read it again, a couple of times.

Thanks go out to Reedsy Discovery for an advance copy of this fabulous book! My review, as always, was an unscripted and honest opinion.

Having grown up in the South, there was rarely a story told in my family that didn’t involve the paranormal or supernatural, and this is reflected in my work. I prefer writing Historical Fiction with Gothic elements but also enjoy Fantasy and Science Fiction in historical settings. 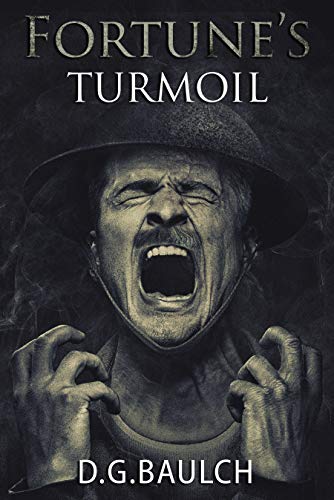 1st July 1916. Battle of the Somme. After seven days of preliminary bombardment 140,000 British soldiers assault the German front line on a fourteen-mile front from Serre in the north to Maricourt in the south. At 0730 hours Sergeant Fortunatus Berriman of the Somerset Light Infantry clambers out of the trenches near The Nab to race across no-mans-land amidst the machine-gun, rifle and shell fire at the head of his platoon of men. He is broiling with hatred, hellbent and headlong into violence, motivated not by patriotism or loyalty to his men but single-minded vengeance directed at 2nd Lieutenant Richardson, his commanding officer and nemesis. Somewhere up ahead, through the smoke, bullets, bombs and trenches his officer is fighting with the first wave of infantry. Nothing is going to stand in his way, not even the German army. He will get his revenge before a sniper’s bullet finds its mark, the perfect cover for a well-deserved execution.

My Personal Layman’s Review-Me being me

The author’s writing style is superb. He could probably write school-worthy history books that would actually capture the attention of the usually bored-out-of-their-mind teens/college students.  My great-great uncle suffered from severe PTSD and I thought of him, frequently, while reading this novel.  The horrors, the hate, the death, the desperation, the spirituality, and the paranormal; all of it hit home for me.  I felt this book.  He writes like he was there and he pulled me in with him.

I was moved by the writing. The vivid detail put me in the story, as if I was a bystander witnessing the events, personally. Being one whose heard first-person accounts of WWI, this was on the mark; the author is brilliant and his research is evident.

Some scenes are utterly gut-wrenching, and I couldn’t help but feel completely heartbroken for our characters. At other times, I was absolutely furious, as I was reminded of society’s checkered past and how it dealt wrongly with the effects of the war. It was dark in a way that most war novels need to be, but it has uplifting moments that even out the flow. The spiritual aspect was introduced beautifully, and the battle scenes were literary adrenaline.

As a whole, it’s a written spectrum of events that when brought together, make a beautiful read

I received a complimentary copy via Reedsy Discovery-a fabulous way to discover extraordinary authors. This is my honest opinion and unscripted review.

In 2013 he led his first tour of the battlefields of Belgium and France, uniting relatives with the stories and graves of great uncles and great-grandfathers. As interest surged during 2014-2018, he conducted battlefield tours throughout 2015 then changed focus from singular research to concentrate on the Battle of the Sambre, 1918, organising and hosting a large commemorative event, gathering relatives of the dead in the village of Locquignol, France on 4th November 2018.

Having absorbed so much from the stories of the fallen, a work of fiction on the subject became a reality in 2016 when the “sergeant in a shell hole” concept was born.