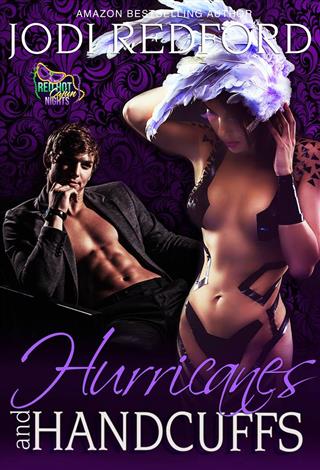 Hurricanes and Handcuffs by Jodi Redford

Gabrielle Scott is fed up with helping her playboy boss seduce and woo his countless bimbettes courtesy of her culinary masterpieces. Yeah, the pay is good, and you can’t beat the luxurious digs she’s treated to as his resident personal chef. But she can’t afford the frustration of living under the same roof with the one man who drives her crazy in every possible way. The damnable truth? She’s in love with the irredeemable bastard, and the only way she’ll get over him is to get naked under him. The plan? Attend Jax’s annual Mardi Gras ball incognito and entice him into a hot night of sin—right before handing in her resignation.

Jaxon Noble always gets what he wants. Especially when it comes to the opposite sex. So when Gabbi shows up at his party in an eye-popping costume and outrageously flirts with him it’s a foregone conclusion that she’ll finally be his. About damn time the stubborn woman came to her senses. He’s more than happy to go along with her game, and the combustible heat they generate together proves it was well worth the wait to have her. But when morning comes and Gabrielle calmly announces she’s quitting, Jax is faced with the sobering fact that perhaps money can’t buy everything. Or more to the point—the only person who’s ever meant anything to him.

For someone who’s used to winning at all costs, losing Gabbi isn’t an option. And Jax will pull out every sweet and sexy trick to convince her to take a chance on a forever with him. Even if it means handcuffing her to his bed.

This book contains a sassy chef, one determined bad boy billionaire, Fur-lined handcuffs and inappropriate consumption of beignets, several sinful
drizzles of honey, and enough sizzling chemistry to set off the smoke alarms.

This entry was posted on January 30, 2015, 12:21 pm and is filed under Book News. You can follow any responses to this entry through RSS 2.0. You can leave a response, or trackback from your own site.