Tour Stop: THE VAMPIRE’S HOUSE OF PLEASURE by Rose Wynters!

Posted by The Literary Melting Pot in Book News on April 24, 2015 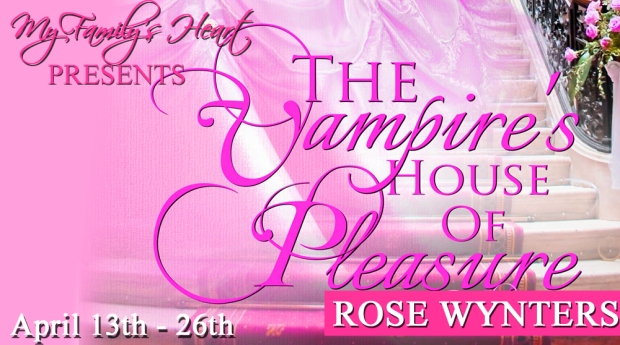 Violet was fascinated with the legends and lore of New Orleans. She was so fascinated that she left everything behind to run a B&B in the French Quarter. But she never imagined that vampires were really real… not until the night she found herself swept back in time to 1797.

Beaten and scared, Violet quickly realizes she’s trapped… and in the most exotic bordello of all. But its clients aren’t mortal, at least not anymore. Locked in an era that’s not her own, she must find a way to escape from the powerful lure of vampire seductiveness… before it’s too late.

This book is free with Kindle Unlimited.

The fortune teller laughed to herself as she watched the red-haired mortal racing away. Fortune teller, indeed. It was a role, but an effective one. She’d pushed her further than she’d originally planned, but it didn’t matter. Violet’s fate had already been set into motion. There was nothing that the other woman could do to stop it, even once she realized the truth.

Theodosia tongued her erupted right fang, enjoying the heady taste that came from the droplet of blood, before smiling in satisfaction. The debt she owed could never fully be repaid, but that wasn’t uncommon when it came to matters of life… or death. But Theodosia wasn’t one to forget, especially when she found herself in the role of being indebted to another. It had taken hundreds of years, and more than a little black magic, but it was done.

Whether it would end in triumph or tragedy, she didn’t know. And really, she didn’t care. She’d done her part, the outcome was out of her control. A tall, muscular man walked by, his blood hot and heated from exertion. Her stomach growled, her thoughts turning carnal. Silently, she willed a nearby pedestrian to her table, before gifting the unassuming female the contents. In her life, she had little need of trinkets that foretold of her future. She controlled her own destiny, and fate answered to her.

Imagining how good the young man would taste, Theodosia disappeared into the crowd with a seductive, mysterious smile on her face.

I’ve often been asked how I’m inspired to write about werewolves, immortals, and zombies. The answer is easy. I adore them.

Be it the Wolf Town Guardians or the Endurers, these characters have been a joy to write about. And why not? What woman wouldn’t love a sexy immortal male or a long-lived werewolf that is destined to have them?

Not all of my books contain plus-sized heroines, but many of them do. I believe in true love and true love isn’t based on a size tag. If you agree with this, I think you will enjoy my books.