Posted by The Literary Melting Pot in Book News, Reviews on December 11, 2014

As Director of The War Office, Stuart McKenzie, has proven himself capable of making difficult decisions in times of crisis and keeping government secrets safe. When he walks in on someone ransacking his study he quickly moves to apprehend them, only to be tossed on his back as the burglar escapes into the night.

Cassie’s father has become a pawn in the fight against Napoleon. When the enemy kidnaps him, she will do anything it takes to get him back – including stealing government secrets from Stuart McKenzie, the Director of the War Office.

When Cassie is caught, she reluctantly agrees to Mack’s assistance as there is something far more sinister going on. As Mack embarks on his mission, he will find that enemies are often closer than one would think and that sometimes your ally will come in the least likely form. When passion erupts between Mack and Cassie, they find their lives forever altered. But just as they believe their lives to be free of danger, a new threat is lurking about, promising to rip their happiness away from them. Will they be able to trust each other enough to defeat this new threat, or will they be torn apart for all eternity?

This was a fast-paced read that I simply could not put down!

I admit that I was expecting more content pertaining to the wars during this period, but the author has done a superb job of delivering a thrilling alternative.

Mack and Cassie are intelligent, gorgeous, and very hard-headed! Both have inner demons, which sometimes cloud their judgment. It is this, along with a few other similarities that cause the fiery couple to butt heads. These altercations can be comedic, heartbreaking, and incredibly sexy! I enjoyed reading as the layers were peeled back and our hero and heroine were truly revealed.

This novel stands alone well. Each sorrowful scene was countered with either comedic relief, or an act of kindness. The mystery involved had me second guessing everyone, and I couldn’t get enough of the passion! I will be reading the rest of the author’s work, as the secondary characters are too wonderfully written to ignore. I thoroughly enjoyed this novel, and I recommend it for romance and mystery lovers.

From a young age I could always be found carrying around books to read while watching my grandmother’s soap operas with her. I read anything and everything I could get my hands on and even made up skits and stories for my friends and me to act out. Once I outgrew the children’s and YA books, my mom introduced me to an entirely new world – contemporary romance. Upon discovering I had a love for history I began devouring historical romances. One day, sitting in a college British History class, something the professor said made me think, I wonder. I quickly called mom (also a writer) and ran the idea by her. After being told, “Of course you can do it, you’re my daughter,” the rest, as they say, is history. I currently share my love of reading with the next generation as a high school librarian, and share my personal life with my demanding dog trapped in a cat’s body, Ajax. 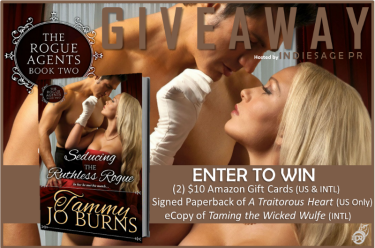